The concept of public service has been a central element of broadcasting culture in most national contexts right from the off. Yet current trends in media technology, governance and ownership present challenges to long-standing notions of the role of public service broadcasting. This was the basis for a conference, The Place of Public Service Broadcasting: Transnationalism, Localism and Identity in the Digital Age, at York University on 4 July.

Public service broadcasting has become increasingly under threat due to the advent of digital distribution, the expansion of bandwidth, and, arguably, the diminishing importance of the national as a locus of identity for broadcasters and audiences. Most significantly for me, digital media has blurred the boundaries of producer and consumer, challenging the dominance of treasured institutions such as the BBC as sole producers of knowledge. Throw in infinite choice and highly personalised content and we might as well issue a P45 to the once heralded ‘mass audience’. 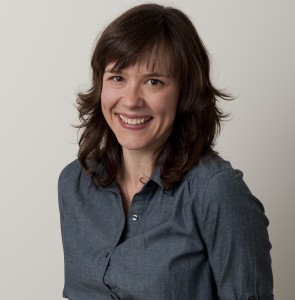 I attended the gloriously modern Department of Theatre, Film and Television for an industry panel discussion on these issues with Hilary Perkins and Colin Ward. Hilary is a Digital Executive Producer and Creative Consultant. She’s got a CV that’ll turn you green with jealousy, and was responsible for commissioning interactive media experiences to complement flagship drama on C4 and E4, such as Skins, Misfits and Shameless. If you’re thinking of embarking on a digital storytelling project, seek her out. Colin Ward has extensive experience of working in children’s media production and gave a really passionate talk, backed with scary facts, about the diminishing production of British based children’s programmes. The panel was Chaired by James Bennett (Royal Holloway).

My talk focussed on my experiences of working as one of 53 commissioned artists on The Space. The talk could and should have been a lot better but unfortunately I hadn’t prepared anything as I wrongly presumed we would just be debating issues. I had to wing it, which shouldn’t be a problem, but in the presence of such interesting figures I think I let myself down a bit.

The Space was an incredible experience which has influenced the way I think about storytelling in so many different ways. One of our main remits was to think about how to diversify content for media platforms and to reach niche audiences. This conference gave context to this remit and made me realise how and why this project was funded: organisations like the Beeb are fighting for their life. I hope they win that battle.

One issue I didn’t talk about, or at least I don’t think I did, was the way The Space tried to create a platform for arts organisations to broaden their reach. If the BBC/Arts Council can continue to do this (a new round of funding has been announced) then they still have a valuable role to play in modern life. Everybody may have the ability to publish their ideas but that doesn’t necessarily guarantee people will see it. The BBC, perhaps as a curator, still has the power to draw this content together and make it visible. 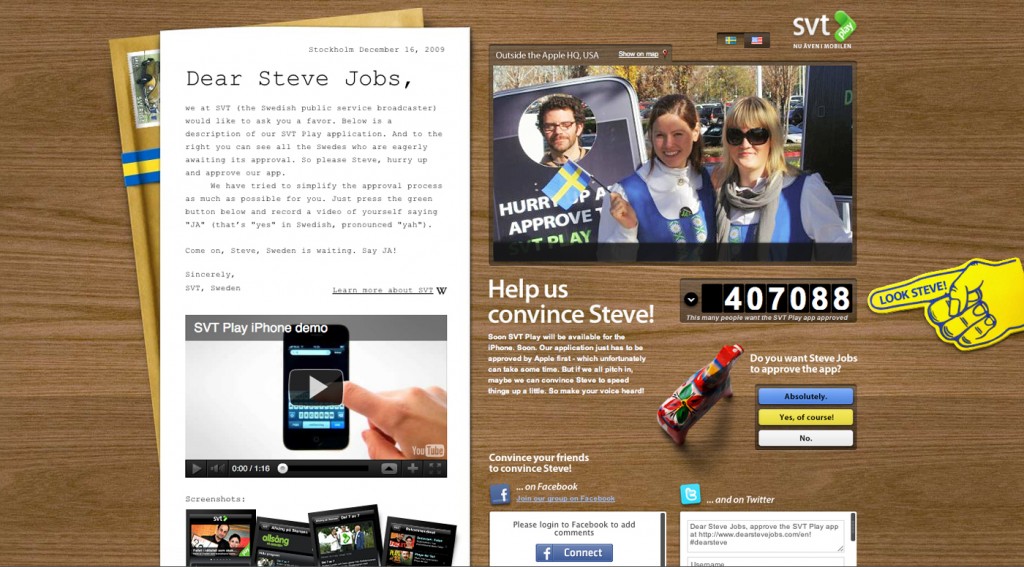 There were loads of interesting talks that day but I particularly enjoyed Pernilla Severson (Malmo University) discussion on social media engaging fan-based social network practices. She gave a case study of 2009 campaign by Swedish television to promote an SVT App. The campaign was superb and yet another example of the power of engaging the public through social media. Check out Dear Steve Jobs and learn… 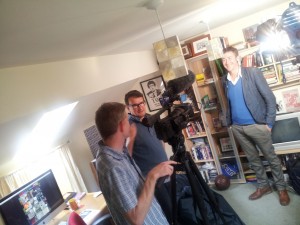 On 29 October Inside Out broadcast a ten minute documentary detailing the last six months that Paul Fillingham and I have been putting together the Sillitoe Trail for The Space. The trail explores five locations from the novel Saturday Night and Sunday Morning and at each location we’ve had some form of public engagement. This has included interviewing members of the Occupy Movement in Market Square, a talk on the Victorian Goose Fair at the New Art Exchange, a stroll along the Trent chatting to fishermen, a pub quiz in the Golden Fleece, producing coursework for Design students at NCN, book launches of featured authors, Sillitoe Day at the Nottingham Contemporary with Billy Ivory, recording podcasts at Paper-Stone Studios and Confetti, sending a storyteller to the Raleigh Workers Club in Wollaton, radio and television appearances and many other events.

Cramming all of this in to a ten minute documentary while also explaining the purpose of our project required some serious editing and I’m generally pleased with the outcome and incredibly fortunate to have had the support of Tony Roe – who is a member of the Alan Sillitoe Committee. Paul and I went over to Tony’s house in Ruddington to film the linking pieces. Naturally, Paul was placed in front of a computer and I was interviewed in front of a bookshelf. This was fine except for one minor detail: I didn’t want to be filmed in front of Tony’s collection of books which included numerous offerings from Jeremy Clarkson.

I guess books are the one thing that I would be a snob about but I think this is fair given that we were recording for a serious documentary on a six month project. I’d have looked a bit of a hypocrite spouting on about the importance of local literary figures with old Top Gear peeking over my shoulder. Fortunately, Tony had many more books scattered around the house and so we were able to construct a reasonably representative array of relevant literature. 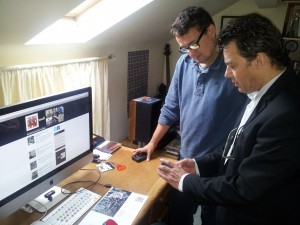 The most pleasing aspect of the documentary was seeing someone from Occupy as we were unable to use their work in the project in the end due to various reasons. It was also good to see the NCN students discussing their work. They’ll be really chuffed to see themselves on screen and hopefully it will boost their confidence to push their work further. I absolutely hate seeing myself on screen which is why I enjoy the relative anonymity of writing but as I no longer have a television this isn’t really much of a problem.

The documentary will be uploaded to The Space at some point.