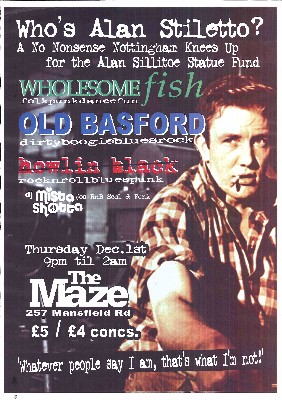 When I joined the Alan Sillitoe Committee, I thought it would take a year to raise the money for a statue. Now, with a bit more experience and a few events under my belt, I’d estimate three years. So let’s call it five for cash. It’s very different to events I’ve put on with LeftLion because ‘having a good time’ is not good enough. It’s about end results, or to quote my father, ‘a salesman is only as good as his figures.’ But no matter how difficult things get I keep reminding myself of when I first read The Loneliness of the Long Distance Runner and Saturday Night and Sunday Morning (SNASM) as an impressionable and somewhat lost teenager. They were absolutely integral in defining my moral outlook and ethics. When things get difficult, I think of the stubborn self-belief of Colin Smith and refuse to give up. I also remember that when I wrote to Alan, he wrote back. How many writers today would take the time to respond to a book-loving nobody?

It’s for this reason I’ve done something I’ve never done before; I’ve applied for an Arts Council Grant of £21,000 for their The Space project. I’ve thought about doing this for LeftLion before but have always been put off by the hellish bureaucracy that it entails, figuring any amount of money is not worth the wanton waste of hours such form filling requires. But on this occasion, I’ve seen each question like a lap being run by Colin Smith and have refused to give in. I’m not going to say what the bid was for because it’s such a fantastic idea, someone else may rob it. As Sillitoe said, ‘if it’s not tied down, tek it.’ I find out on the 21st December if we’ve made it to the shortlist and if we’re lucky, then the real bureaucratic agony will begin. I hope so because it’s a fantastic opportunity that will bring national coverage as well as offering access to the BBC archives and digital support.

One great thing about raising funds is the way that members of the public approach you with ideas or are keen to support in numerous ways. For example, John Aram recently performed a night of music inspired by SNASM and kindly allowed us to go around with the collection buckets and allowed Alan’s son, David to give a brief talk about our plans prior to the concert. Alan, I’m sure, would be touched by the many different ways in which his work is being kept alive and by the genuine support of the local community. 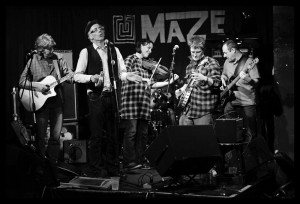 Another recent event Who’s Alan Stiletto? was organised by Mark Shotta, a local DJ who put on a music event at The Maze on 1st December, featuring local bands Old Basford, Wholesome Fish, and Howlin Black. My highlight of that night was seeing author and Basford Ward Councillor Cat Arnold moshing to the music of Old Basford. Talk about wholeheartedly supporting anything to do with her ward! I wonder if the Councillor responsible for Badger’s Mount near Farnborough or Batchelor’s Bump near Hastings takes things quite so literally. 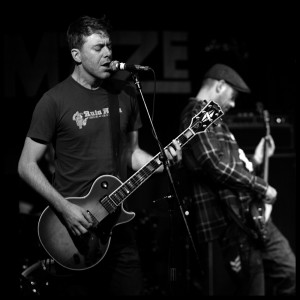 Joking aside, both events illustrate how flexible and varied you can be when raising money and that you don’t need to limit yourself purely to readings or spoken word performances when looking for literature related funding. It is with this in mind that we encourage any member of the public to come to us with ideas or even drop an email about anything that you think we should be aware of – particularly if Albert Finney or Tom Courtney are promoting or performing anything in the UK. Please feel free to contact me directly via this website or contact us through the Sillitoe website. Now did I really agree to run that marathon next year? When am I going to find the time to train? New Years Eve Resolution: Three hours sleep a night. Five is an unnecessary indulgence.