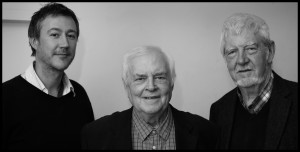 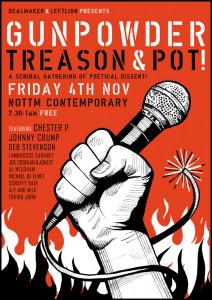 Our Scribal Gathering events are few and far between but when they happen, they’re special. On Friday 4 November we put on a Scribal Gathering of Poetic Dissent to mark the two hundredth anniversary of the ‘Luddite’ rebellion in Bulwell and to show respect to the ‘Occupy’ movement who are currently residing in Market Square. As is often the case with events you are organising yourself, they bring little joy on the night as you’re running around making sure things are going alright and that performers know what they’re doing.

I kicked off the event with a fifteen minute introduction with Motormouf, a young beatboxer from Nottingham who’d previously impressed with performances with Nina Smith and Maniere de Bohemiens. It’s really important when you’re dealing with political content that you don’t start lecturing on the obvious and so we went for a simple format whereby I’d discuss current events and then when I asked Motormouf what he was ‘mad as hell’ about or his opinion of Alessio Rastani – the City Trader welcoming the recession, he’d break out into beatboxing. Then, just when you expected him to continue in this vane, he freestyled a poem about Rosa Parks that was outstanding. Contrast is the key; mess with expectations. I planned this routine in one meeting with Motormouf and it’s so good to work with someone who listens and trusts your judgement. The purpose of the routine was to make him look amazing and me the talentless ‘dumb blond.’ Tis a humble life. 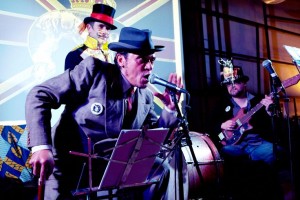 The Lambhorse Cabaret performance was a theatrical masterpiece, creating fake explosions courtesy of balloons and party poppers to bring down the system. They were joined by Stickman Higgins – who I wrote about in my last blog. Stickman is joy personified; he has so much energy it’s like he’s swallowed the sun. He played the part of an elderly Jamaican man and walked around greeting the audience before freestyling as the Lambhorse played on.

The key to large events is variety or else you overdose on the written word. Johnny Crump offered this by scratching on the decks with film visuals projected behind him. We also needed a variety of poets. Aly Stoneman was short and sweet, teasing the audience with her Ms Hood poem – in my opinion the perfect formula as then the audience want more. Joe Coghlan and Jonesy bounced an electric set off of each other, complimenting their differing styles. Debris Stevenson had the audience joining in which got everyone in a great mood whereas Scruffy Dave and Tokin’ John went for more traditional readings. And of course our joker in the pack was Al Needham who has not only made swearing socially acceptable but an art form in itself. 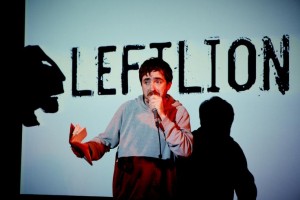 Chester P was our final act and proved that you don’t need a stage persona to perform. Simply exuding personality and being yourself is enough. But who is he? He looked like a crazy old man with autism as he nervously shuffled back and forth on stage on the tips of his toes as he delivered a stream of consciousness that washed over the audience like a tsunami. Every now and then you’d catch a phrase, a joke or a clever metaphor and before the beauty of this observation could settle, bang in came another. Wow.

Of course not everything went to plan. I’d spent ages recording Big Issue Sellers and Protestors in V for Vendetta masks and then recorded audios to be dubbed over the top which related to the film. But these weren’t edited together properly and so our hopes of having an anonymous production didn’t work. This, however, is inevitable when you’re relying on the goodwill and free time of various people to help suture everything together. The event was a collaboration with Dealmaker and LeftLion, photographs were kindly taken by Ralph Barklam with Adrian Towell filming proceedings and Stupeflix made the brilliant video to promote the event. The night was dedicated to Peter Preston who recently passed away and although a free event, we left buckets on the bar for people to donate to the Alan Sillitoe Statue Fund – or to be sick in.

Now we need a theme for the next event. I’m thinking Berlusconi’s Bitches or perhaps updating the Roald Dahl classic…the Fantastic Mr. Liam Fox. So much choice in a corrupt world. Thank goodness for villains, life would be dull.