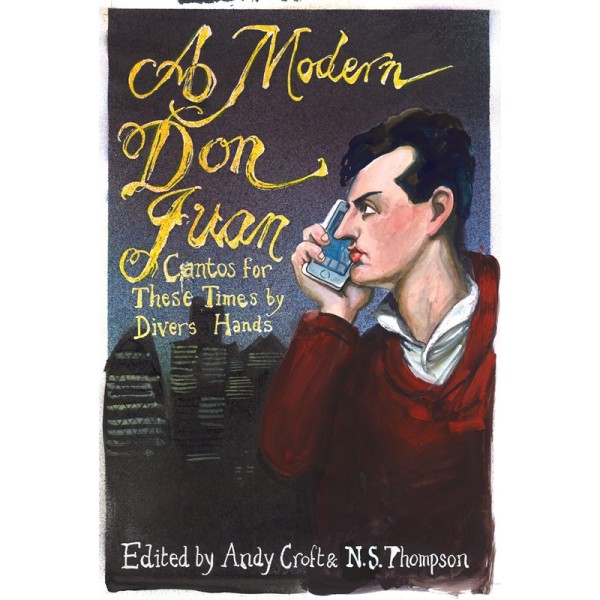 Tales of the fictional libertine Don Juan have been told many times and date as far back as the 1630s with Tirso de Molina’s play The Trickster of Seville and the Stone Guest. Over generations he has transformed into the hero-villain of countless plays, novels, poems and, of course, Mozart’s opera Don Giovanni (1787). But it is Lord Byron’s epic satirical poem (1819-24) that has become most synonymous with the exploits of the legendary lothario. In this latest outing, 15 poets, including T.S Eliot prize winners George Szirtes and Sinéad Morrissey, give the tale a thoroughly modern setting, as skunk-puffing night-club DJ Donald Johnson stumbles from one romantic disaster to the next in a “drunk arcadia”. Along the way ‘Donny’ is transformed into everything from a Brussels Eurocrat to a reality TV celeb. His travels take him on a swanky yacht, into prison and most surreally, into outer space. When he heads into Europe he finds the Greeks need help with austerity rather than independence, though this is nothing compared to the pain he receives from a ‘holistic’ dentist…

Co-editor of the collection, Andy Croft, brings Donny into the ‘unheroic age’ where celebrities are fodder for the unforgiving gossip pages of tabloids, and fame is as transient as ever: ‘how quickly reputations all unravel,/From Cameron and Clegg to Jimmy Saville.’ He discusses our obsession with superheroes and warns that to understand the world of economics you need more ‘than someone in a mask from Marvel Comics’. This humour is brutally contrasted with social commentary on modern warfare, where returning soldiers face a very different battle as they adjust back to ‘normal life: ‘‘but there’s now twice as many in the can/ As there are serving in Afghanistan’.

They say you shouldn’t judge a book by its cover but in this case you can. It’s a beautiful illustration by Martin Rowson that sees Byron’s ancestral home of Newstead Abbey replaced with a metropolitan cityscape and, of course, he’s on his mobile phone, no doubt lining up local conquests on Tinder. But it’s more relevant to judge a book by its readers. Five Leaves, the publisher, offered the book first ‘on subscription’, harking back to the way books were often sold in Byron’s time, demonstrating that there are many people out there who were eager to see this hapless seducer have one more outing. 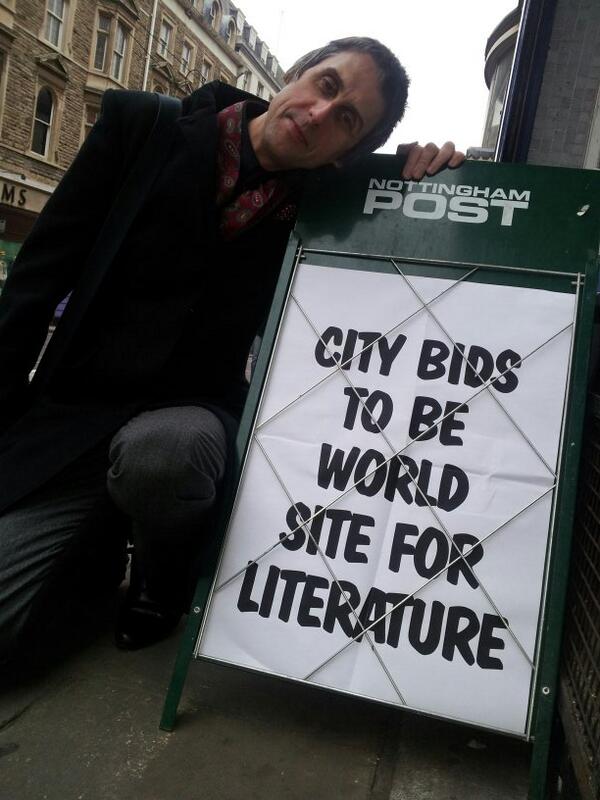 It’s a good time to be living in Nottingham at the moment. There’s a real buzz about the place and at long last we’re slowly starting to get the recognition we deserve in the wider press. Let’s just remind ourselves of a couple of things that are going on. The Nottingham Writers’ Studio, of which I am the Chair, has moved to new premises at 25 Hockley (hope you will join us at our launch on the 16 May) which has an incredible performance space downstairs and four offices to rent to like-minded organisations. As independent bookshops fell below 1000 in April, we bucked the trend when Ross Bradshaw opened up the Five Leaves Bookshop. This was recently followed by Ideas on Paper, a bespoke magazine shop in Cobden Chambers.

We’re home to more publishers than I have fingers which includes Pewter-Rose Press, who publish short stories in an era that keeps claiming this format is dead and Candlestick Press, whose novelty poetry pamphlets ‘More than a Card’ have helped make poetry more accessible. We have a writer development agency in Writing East Midlands who organised a Writers’ Conference in April as well as ongoing workshops for aspiring authors. We celebrate local authors through The East Midlands Book Award and have a city-wide literature festival in October called the Festival of Words.

When you start to throw local writers into the equation such as Betty Trask winner Nicola Monaghan, Booker shortlisted author Alison Moore, or Impac winner Jon McGregor, it’s clear we have writers worth reading, each following on in the footsteps of Byron, Lawrence and Sillitoe et all. All of which has led to a recent collaboration by local organisations, (thanks in particular to Pippa Hennessy, Stephen Lowe, Bromley House Library and City Council), to put in a UNESCO bid for Nottingham to be officially recognised as a City of Literature. So you can see why I find it so hard to leave my home town (I’ve left four times but always been drawn back by the people).

For the UNESCO bid to be successful then everybody involved in the writing industry needs to find new ways to work together and support each other. I’ve done this recently through an interactive graphic novel I’m editing together called Dawn of the Unread. It aims to support libraries and independent bookshops by raising awareness of local authors and our incredible literary history. In addition to the links we’ve made within literary circles we’ve also extended out into the wider community by partnering with design agencies, colleges, universities and local action groups such as the Women’s Centre. We’ve also incorporated news of the UNESCO bid into one of our pages, which is why news like this needs to be shared so that other projects can be reactive and supportive.

Nottingham is not just a creative quarter, it’s a creative city. So next time you’re thinking of putting together a project remember our streets are full of stories. As I often like to smugly joke to people: You can’t walk down the street in Nottingham without bumping into a writer. But finding a decent plumber is a bleddy nightmare.